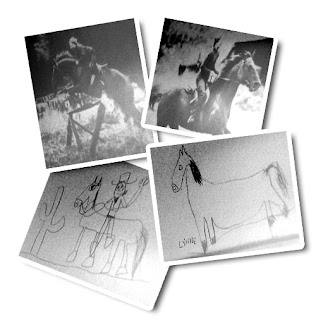 A youthful Lynne Avril riding her horse and some of her childhood sketches
This past weekend was the Fourth Tucson Festival of Books. It was a wonderful event and I spent most of my time there listening to the presentations of the many authors and illustrators that where there. I was able to hear my good friend Lynne Avril give her presentation and give a painting demonstration. She presented together with Jean Ekman Adams who is an author illustrator. 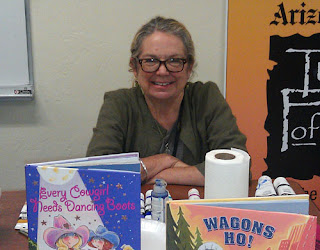 The most wonderful Lynne Avril
Lynne has illustrated over 70 books and has several more currently lined up. She is illustrating the new “Amelia Bedelia” series published by Greenwillow Books. I have known Lynne now for several years but I never realized that she grew up with horses. I was horse crazy myself and used to have a horse back in Australia, but I never knew we had that in common. Of course in Lynne’s case, it makes complete sense, seeing that she is from Montana. During her presentation Lynne shared some of her childhood sketches and explained that her dad, who was also a very talented artist, was always very critical and urged her to make sure she draw things accurately. Lynne credits her dad for teaching her how to look at things which is what makes her the incredible artist that she is today. Lynne talks about her dad often and says that to this day, in his 90’s, he still critiques her work and likes to point out when something doesn’t quite appear the way he things it should. 🙂 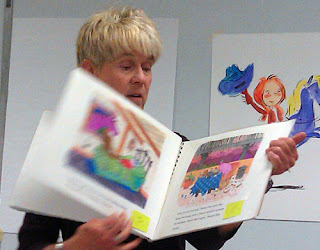 Jean Ekman Adams talks about her working process
Jean Ekman Adams also has a father that was an artist. She thinks of herself as someone who draws rather than paints. She loves adding more and more detail to each of her illustrations and as a result does a lot of erasing which working on her roughs. When she thinks of her stories she writes for herself rather than an audience. I can relate to her working process, because when working on her own books she comes up with the drawings first and then writes to words afterwards. This is something, she chuckles, that at times can frustrate her editor. I do understand this though, because as artists we are visual people and so think and work visually. When exploring her characters she tries to come up with as many character traits as possible. She asks herself:
What does he like to eat?
What does he hate to eat?
What is he scared of?
Where is he going”
etc.
All these questions allow her to really get to know her character, which ultimately make telling his story easier. 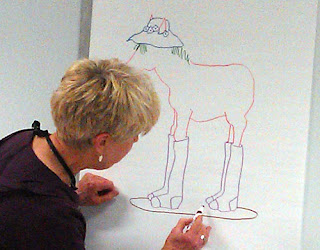 She likes to draw donkeys wearing socks, because their legs are so difficult to draw. I got a real chuckle out of that one.
I’ll be posting more write ups about the presentations I attended soon.
Happy drawing,
T.