Here’s a quick interview with author Elain Ouston. She lives in beautiful Australia, which I miss dearly. T. 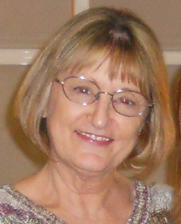 Elaine Ouston’s fantasy novel, Captured – the second book in The Mystery of Nida Valley series, a tale of magic, time-travel, and adventure, for readers aged 9 + has just been released. The series is about a hidden valley full of ancient animals, dinosaurs, and much more. 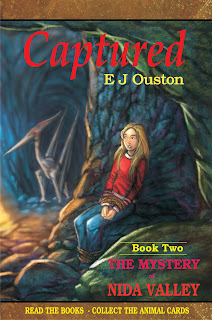 The story began in book one when fourteen-year-old Meg Sealy, her friend Amanda, and her older cousin Jaiden, stumbled upon a secret valley where time stands still. The three friends were thrust into a dangerous world of magic, time travel, and creatures they believed extinct. They learnt that it is their destiny to use their new magic skills to join the fight to save the valley from an evil breakaway order bent on exploitation. Joined by their friends and the valley’s protectors, Keeper Philmore and his grandson Michael, they faced danger from many sources – including a dragon attack and fighting off the evil Grundymere, the leader of the breakaway group, and his henchmen.
Meg discovered she had the ability to use the Time Travel Portal that only one of her family every hundred years can use. Her first journey was a life-saving mission for the last surviving giant wombat – but even that was not without danger.
In book two, the story continues with more mystery, time-travel, and magic. Meg strives to control her escalating magic powers, and she and her friends fight to discover the identity of the traitor in the valley. Grundymere is still at large and seems determined to capture Meg. The elders of the Order believe it is to stop her from following in her grandmother’s footsteps and becoming the next Grand Leader of the order that protects the valley, The Guardians of Nida – but he has a much more sinister reason.
The elders of the Order gather around her to keep Meg from the clutches of Grundymere without success. Then Meg and her fellow guardians, time-travel again to try save the animals from extinction, but will the changes they make in the past harm or help the future of the valley. They won’t know the answer to this until they return.
About the writing of this series:
I am often asked how a book about real animals that existed over 40,000 years ago, and dinosaurs became the basis for a fantasy novel. I came across the megafauna when I was researching animals for another book. They fascinated me, as I had never learnt about them at school.
I asked a group of children what they knew about these creatures and discovered that they had no knowledge of them. Their interest in hearing about the animals, fueled my desire to write the story, and so I began in earnest. Some of the questions the children asked during our discussion shaped the story. For instance, ‘Did they live with the dinosaurs?’ and from a very cute 4 year-old, ‘Were there dragons too?’ So I decided to include the three groups, megafauna, dinosaurs, and mythical animals. It is a strange mix and it was interesting coming up with a way to make the valley’s creatures credible. (Well, as credible as fantasy has to be). Fantasy has always been my first choice to read so it was natural for me to write in that genre.
I wanted the book to be entertaining as well educational. So I trawled the internet and libraries for accurate information. I found what I needed in books, and Museums and University websites. I have recorded the sources on the inside page of the book and on the cards. So any reader can do follow-up research, or any librarian or teacher can confirm the information.
I realised as I wrote the
story, that even though I described the animals in as much details as I could, the readers would still have no idea what these magnificent creatures looked like. To include colour drawings in the book would make the printing too costly, so I decided the create collector cards. I commissioned an artist, Aaron Pocock, to draw the animals from images I found on museum websites and in a book, The Magafauna of Australia, by Danielle Clode.
There are 15 cards in the packs, plus a bonus card. The cards can be viewed and purchased at the website http://morrispublishingaustralia.com
I was lucky enough to receive great reviews for the first book in the series and the reviews for the second book, Captured, have been just as good. You can read them on the books website http://themysteryofnidavalley.wordpress.com
All over the world, printed copies and eBooks of both books can be purchased from most online stores, including Amazon http://www.amazon.com/dp/B0084FAGSE and The Book Depository. In Australia, they can be ordered from your local bookstore through Dennis Jones and Associates. They are distributing the book Australia wide. A signed paperback is available from http://morrispublishingaustralia.com with payment through PayPal.